This November Habitat For Humanity will raise the walls on its 300,000th house in Florida and the 300,001st in Guatemala. Christy and I had the pleasure of volunteering on another HFH house that was somewhere between 200 and 300 thousand and halfway around the world. We joined nine other American volunteers in a Habitat For Humanity Int’l Global Village build in Barskoon, Kyrgyzstan. Kyrgyzstan is one of the poorest of the former Soviet republics and is located in Central Asia just south of Kazakhstan and bordering China’s western province of Tian Shan. Kyrgyzstan is nearly all mountainous with many peaks exceeding 20,000 feet in elevation. Kyrgyzstan is politically stable with a parliamentary government. Corruption and graft are widespread, however, so people are generally worse off than they were under the former Soviet regime. 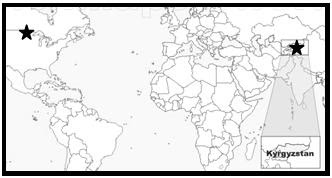 After a very long day of air travel we arrived in the capital of Bishkek, met our group and the next day drove by minibus five hours east to Barskoon on Lake Issyk-Kol (the second largest alpine lake in the world). For the next ten days we worked on several Habitat houses--not as technical advisors—but as laborers. The houses were built in a traditional Slavic style and made of earth blocks reinforced with concrete (and second floor stick framing), and plastered with mud and a final cement plaster topcoat. Our team spent most of its time preparing the walls and mixing the ‘mud’. The technique here was not that much different than that used around the world for millennia—we took clay, mixed with chopped straw and water, and tramped it well till it was pliable and would stick to the walls. As I recall from Exodus, this was the work of slaves! I gained a new perspective of the world from the middle of a mud pit and our Kyrgyz neighbors gained a new appreciation for Americans who were willing to come this far to do such menial labor. Even though communication was difficult because of language differences, we were able to demonstrate God’s love through the simple tools we were using. 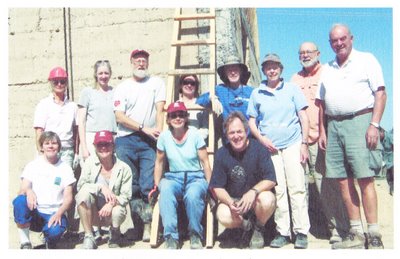 HFH has Global Village projects in dozens of countries around the world. If you have ever considered travel abroad but dislike being a tourist, Global Village gives you the opportunity to briefly immerse yourself in the local culture. Yes, we were treated as special guests, but we ate Kyrgyz traditional food (unfortunately the fermented mare’s milk was not in season), slept dormitory style on Kyrgyz shyrdak felt blankets, used the outdoor plumbing, and struggled with learning a few Kyrgyz words and phrases. We went to Kyrgyzstan to serve but we received so much more than we gave.
-Doug Gettle
Construction Committee Chair
and Habitat Board Member